Kiyohiro Takada (Doronco), who would later join LRD as a bassist, was a frequent customer at OZ who ended up taking on the maintenance of the club’s equipment. As part of the sound crew for the concert at Musashino Public Hall and the recording of “OZ DAYS LIVE,” he became closely involved with the band.

Doronco: I had been wanting to start a band since I was about 18, and often went to Kichijoji looking for people to make a band together. It was right around that time that a club called OZ opened. For me it was the first experience of live concerts. I thought to myself, “If I connect here, I’ll get the chance to play on that stage too,” so I started hanging out there, and became close with the people there. I did whatever I wanted in OZ, though I never became staff, I was always a customer. But when the musicians were complaining about their sound being off or their mics not working well, or about this and that, there was no one to deal with it. I saw that and said to myself, “Well, I’ll do it” kind of thing.(laughs)

At one point, people in OZ were talking about a band that was coming from Kyoto to play, and when I looked at the flyer, I saw ‘Hadaka no Rallizes’ written on it. What a bizarre name. “What is this, a mistake from Burroughs’ novel or something? (*Burroughs’ ‘Naked Lunch’ is ‘Hadaka no Ranchi’ in Japanese) I’ve got to go check this out,” I thought to myself. When I went, I heard the kind of sound that I had been wanting to play myself. It was distortion with a sharp beautiful sound. The performance was really simple, with a sense of speed. Everyone in the band was about 20 years old and full of energy, having lots of fun. After, the band became darker, but at that time, they didn’t have that image yet, and all the members were really colorful. It was really refreshing and not dark at all. Rather they were all cheerful, energetic, and laughing a lot. The performances recorded in “OZ DAYS LIVE” are from that period.

Soon after that, the idea for the LRD concert at Musashino Public Hall came up, and I was asked to do the PA, as it’s called now. We made amazingly huge sound there. At that time, PA didn’t exist yet, the only way to play was to match the volume of the songs through the vocal amplifier. If we made the other instruments louder, the vocals would be buried. But I thought to myself that if I could make the vocals louder, the instruments could also play with huge sound. So I told OZ manager Tezuka that I wanted to connect two vocal amplifiers together, and he got hold of what was probably one of the most powerful amplifiers in Japan at the time. The band Creation loaned it to him for the concert. With that, I was able to make the vocals resound at really high volume, so then the instruments could play with huge sound too.

Harimaoh: In the beginning of 1973, there was a plan for a “Les Rallizes Dénudés Concert” organized by OZ, and under OZ manager Tezuka’s leadership, all of OZ mobilized together for preparations. The venue was Musashino Public Hall in OZ’s local Kichijoji neighborhood. Someone made a cool poster too. 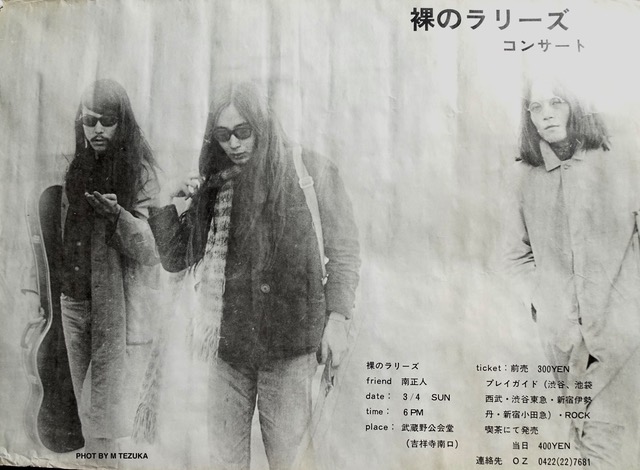 The guitar amplifier in OZ at the time was made by a German manufacturer called Hoffman, a pretty beat-up piece of equipment that Doronco was always patching and fixing and somehow managed to keep going way past its time. Kind of a worrying condition for a large concert. For this big day, Tezuka asked Creation, one of the bands that played at OZ at that time, to loan their equipment. The amp that arrived was a Royal Super Bunny. It was an orange-colored tube amp, the same kind of orange as the British-made Orange, with two sets of double cabinets stacked on top of each other! It was made in Japan I think. On the day of the concert, Mizutani played with the two heads and the four cabinets by himself. A massive and profound sound reverberated throughout the whole hall.

The evening before the concert, all LRD members and all OZ staff assembled in OZ for preparations. The idea was to create a radically new kind of psychedelic space that had never before been seen in Japan, and preparations went all night. The plan for the light show was really elaborate. Oil lighting by overhead projection was set up. The light show was directed by a bunch of graduates of the Nihon University College of Art’s Department of Visual Arts who had returned to Japan after wandering around India and other countries. Photographer Aquilha Mochiduki’s friend from his college days, Masaru Oiwa, who played bass guitar with LRD for a short time, was also part of the team at that time.
Looking back, I don’t think there was any other live performance in Japan around that time that came near achieving such a level of authentic psychedelic art as LRD.

Minoru Tezuka: When we rented Musashino Public Hall and did the LRD concert, it was the first time we rented overhead equipment and projected swirling water drops of oil in a background production. We played for about two hours and it was amazing. Quite a crowd showed up too.

There were also some who couldn’t take the guitar solo that went on and on, and got up and left, face down as they went out.
After that concert, we were banned from the Musashino Public Hall. For one thing, the concert went overtime. Also, it seems that something was damaged by someone in the audience or somebody. One thing or another, in any case, we ended up being told unequivocally, “We will never rent out the hall to you again.”

Soon enough, it came to be that OZ was going to close in September of that same year, and with that, came a series of live concerts called “OZ LAST DAYS.” A compilation album called “OZ DAYS LIVE,” featuring performances by several groups including LRD, was also produced.